Always check the prices before booking and the latest travel information before departure.

Santa Cruz is where you arrive and can travel onwards on Tenerife.

The distance between Agaete and Santa Cruz de Tenerife is approximately 68 km / 42 miles. The Agaete Santa Cruz de Tenerife ferry is able to cross 68 km in 1h 18 minutes in a convenient way. The speed of the ferry is on average 32 nautical mi/h (knots). It is worth noting that travel time may vary due to wind changes and different vessels operating on the ferry route.

Most ferry operators want you to arrive 30 to 60 minutes before the ferry departure. The Agaete-Santa Cruz de Tenerife connection with sailings up to 8 times per day is a type of ferry connection in terms of sailings and distance (68 km) you normally have to be 45 – 90 minutes early. Our advice however is to always arrive very early at the port, don't let a traffic jam, long queue or any other problem make you miss your ferry. Check the Fred.Olsen Express website to finalize your preparation for this ferry trip. 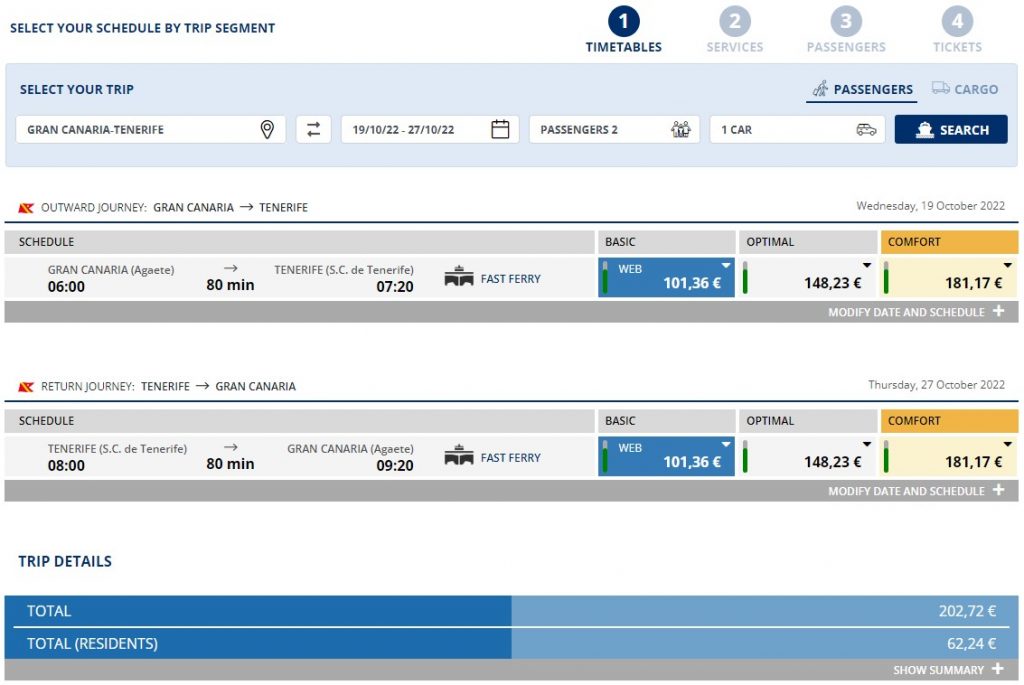 Our Test booking at Fred Olsen Express from Ageate to Tenerife

For most travellers only two prices (ferry fares) are relevant: The minimal price for a single crossing and the average fare for 2 persons (return ticket) you can simply expect when you go on this ferry.

Note: These prices of course can fluctuate a lot. For the calculation for this price we added a ‘car' on this route.

Which ferry companies sail on this crossing?

The ferry between Agaete and Santa Cruz de Tenerife is currently operated by: Fred.Olsen Express.

How long does the Agaete-Santa Cruz de Tenerife crossing take?

The travel time of the Agaete-Santa Cruz de Tenerife ferry is around: 1h 18 minutes. Please arrive early at the harbor and calculate extra time for check-in and boarding if necessary. How long in advance you need to be present is usually communicated on your ticket or on the website of the ferry operator you sail with.

How often does the Agaete-Santa Cruz de Tenerife ferry sail?

What is the distance between Agaete and Santa Cruz de Tenerife?

The distance between Agaete and Santa Cruz de Tenerife is approximately 42 miles or 68 km.