The move to Geelong

Early 2020[1]ABC News: Spirit of Tasmania to move Victorian operations from Port Melbourne to Geelong already the Spirit of Tasmania ferry service announced the move from Melbourne to Geelong. The ferry service needed the space and also better check-in facilities and above all: better parking services as the parking space in Melbourne was expensive. At that time the CEO of TT-Line Mike Grainer said the following:

“The move to Geelong provided the company with a unique opportunity to enhance the passenger experience”.

The advantages of Geelong

“We left the mainland from Melbourne Port and arrived back in Geelong. Geelong is the better location as you can be on the highway home in a few minutes.”

“The move of the departure point for the Spirit really suited us, as we drove from Adelaide, and Geelong is much closer.  “

Booking was easy, loading our motorhome and all of the other transport professionally undertaken.

The Spirit of Tasmania does need to work on the toilet block though! =)

Arriving in Geelong early, top of the queue, we had to walk a long way back to circumvent the barrier, in order to get to the toilet.

Now the only thing we have to do is wait for 2024 when the new ships arrive to really see what this route may bring:

More info about this route: Geelong to Devonport. 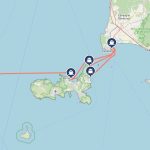 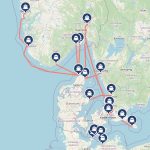 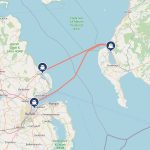 Ferry to Ireland from Scotland 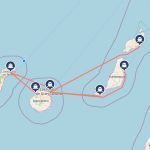 High-speed emission free catamaran to US

We use cookies on our website to give you the most relevant experience by remembering your preferences and repeat visits. By clicking “Accept All”, you consent to the use of ALL the cookies. However, you may visit "Cookie Settings" to provide a controlled consent.
Cookie SettingsAccept All
Manage consent

This website uses cookies to improve your experience while you navigate through the website. Out of these, the cookies that are categorized as necessary are stored on your browser as they are essential for the working of basic functionalities of the website. We also use third-party cookies that help us analyze and understand how you use this website. These cookies will be stored in your browser only with your consent. You also have the option to opt-out of these cookies. But opting out of some of these cookies may affect your browsing experience.
Necessary Always Enabled
Necessary cookies are absolutely essential for the website to function properly. These cookies ensure basic functionalities and security features of the website, anonymously.
Functional
Functional cookies help to perform certain functionalities like sharing the content of the website on social media platforms, collect feedbacks, and other third-party features.
Performance
Performance cookies are used to understand and analyze the key performance indexes of the website which helps in delivering a better user experience for the visitors.
Analytics
Analytical cookies are used to understand how visitors interact with the website. These cookies help provide information on metrics the number of visitors, bounce rate, traffic source, etc.
Advertisement
Advertisement cookies are used to provide visitors with relevant ads and marketing campaigns. These cookies track visitors across websites and collect information to provide customized ads.
Others
Other uncategorized cookies are those that are being analyzed and have not been classified into a category as yet.
SAVE & ACCEPT