The ferry company Havila Kystruten operating in Norway is changing the rules for the transport of electric, hybrid, and hydrogen((Hydrogen Vehicles – Wikipedia.org) cars within their fleet. The company bans the transport of these types of cars due to increased fire danger.

While Havila uses hybrid propulsion on their own ships – meaning they have to use large battery packs – electric cars from passengers won't be allowed on the ships.

It is not without reason that the Havila Voyages’ first ship, Havila Capella (maiden voyage in December 2021) was crowned as the winner of the Next Generation Ship Award at Nor-Shipping 2022.  Our four new ships are loaded with the world's largest battery pack ever installed on a passenger ship, meaning that we can sail through vulnerable fjords, such as the world heritage Geirangerfjord, for four hours straight with zero emissions.

The problem with electric cars is the following

When compared to gasoline and hybrid vehicles, electric cars have the lowest number of fires per 100,000 sales. Though electric car fires occur least frequently, they burn longer and hotter than other fires.

Havila made an external assessment regarding the fire risk of these kinds of cars. The reason to make this ban is that Lithium-ion battery fires can take thousands of gallons of water to put out. Which is difficult on ferries or ships.

Havila is the first as we know to ban electric and hybrid vehicles on deck, we are following this possible trend extensively if others would follow.

If you want to be ready for the future you probably should not focus on a ban but you might need to focus on how to take out these fires ‘if' they happen as more and more cars will become electric or hybrid.

Havila will keep on searching for new solutions to be able to transport electric vehicles again in the future. 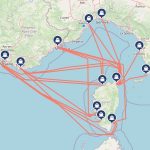 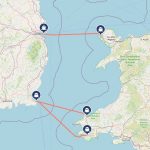 Ferry from Wales to Ireland 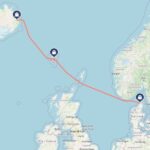 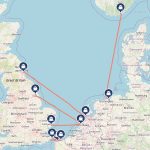